This is an interesting exercise in determining how various stock markets around the world influence or predict other stock markets.


While there can be various factors that drive a stock market up or down, one of these factors may be another stock market half way around the globe.


What follows answers this question and presents some surprising findings.

Myths and Rumors of Myths

There are sayings, or platitudes, that seem to go back to biblical times.  The problem is they are told and retold so often they are taken as fact.  Most people don't know how they started, where they came from, or if they are even true.  Today, however, researchers and analysts are equipped with tools and a quality and quantity of data that were unimaginable even 30 years ago.  These tools allow us to put some of these sayings to the test to determine their truthiness.


One of these sayings is "The Dow Jones Transportation Average predicts the broader markets."  Well, let's put that to the test.


Another platitude espoused by the media during the market swoon in August and September of 2015 was that the coordinated global stock market drop was caused by the stock market bubble in China popping.  Let's put that to the test, too.


Here are a few personal observations from watching the stock markets for over 20 years:

These are mere personal observations, but let's put these observations to the test as well.

The purpose of this exercise is to see if, first, there truly are links between the various stock markets, and second, how the stock markets around the world might be connected and influence each other.


For the sake of the analysis here, each "thing", factor, or variable, is a stock market index.  Some of the indexes used are different indexes within the U.S while all other indexes are the main stock market indicators for many major countries around the globe.


The analysis presented here only uses stock market indexes--no other factors such as economic growth, interest rates, exchange rates, or money supplies were used.  Just the stock markets were singled out to test only how various stock markets might be connected.

Below is a causal network of various major stock markets around the world.  These include the U.S., China, Japan, Germany, the U.K., and Brazil.


If any of the stock markets are independent, they will be represented by a box with no lines connected to it (it will be sitting by itself). 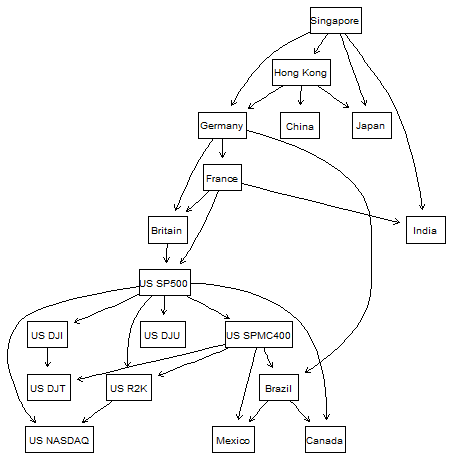 Below are some conclusions that can be drawn from the causal network shown above.  Some are very interesting.


2)  Stock markets around the world are being driven by Asia, not the United States or Europe.


3)  The Singapore Straits Times is at the top of the causal network (a root node).  This verifies the observation that Singapore is the "canary in the coal mine" and should be monitored diligently.


6)  As there is a causal chain from Hong Kong to most of the other stock markets, China may have been the cause of the market swoon in August/September 2015.


7)  The causal network starts with Asia, progresses through Europe and then to the Americas, first to the U.S. and then Brazil, Mexico, and Canada.  This verifies the observation that money travels around the globe following the sun.


8)  Sitting at the bottom of the network is the U.S. NASDAQ Composite (a leaf node).  The NASDAQ is an effect, not a cause.

The stock market index data used was the daily closing values from January 4th, 2007 to October 23rd, 2015.  This covered the period before the Great Recession through the "recovery".  The analysis looked at the change in the daily close of the stock indexes.

USD/CAD Canadian Dollar to US Dollar

How Stock Markets are Interconnected

Why Stock Markets Continue to Rise